Trick to dicing an onion!

I have to say I have never been much of an onion fan. Actually anyone who knew me growing up knows I despised them so much I would tell restaurants I was allergic so they would not even come near my food with that horrible, horrible vegetable! As I grew up I realized they did make dishes a little tastier and wouldn't mind them TOO much if they were in something. (as long as they were very over cooked)  :)   Then I moved on to loving onion rings! I mean they are fried, whats not to love? So now that I love to cook so much I have onion in about 40% of the dishes I make! But, that doesn't mean that I (or anyone I know) enjoys cutting an onion. So one day when I saw this awesome tip on TV I thought huh, why didn't I realize that?? SO here is a quick easy tip on making fine cut cubes of onion! 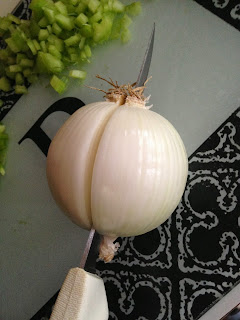 First you want to cut in the onion in half ^  *always use the sharpest knife possible as that cuts back on the amount of juices the onion creates which leads to less burning of your precious eyes ;) 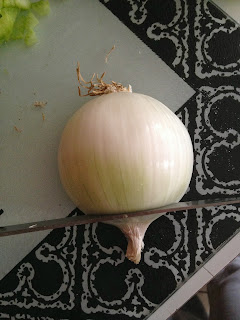 Then you want to cut the top off of the onion. *Its important to not cut the root as that is what holds the onion together 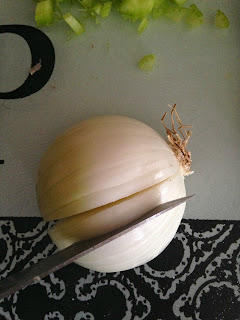 Next you want to slice down the onion making sure not to cut through the root but getting as close as possible. 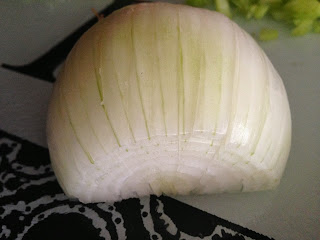 Your onion should look like this with multiple slices all the way around. Now, an onion has natural cuts going the opposite direction, that is what is so cool about this trick.
(At this point if you want sliced onion just cut the root off!) 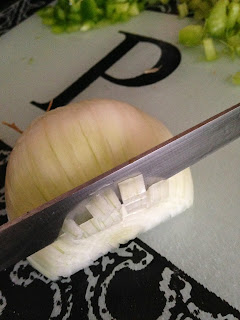 So now when you start slicing it makes perfect little diced squares of onion!!! The smaller the cut the smaller the pieces will be. Depending on your preference or your recipe. 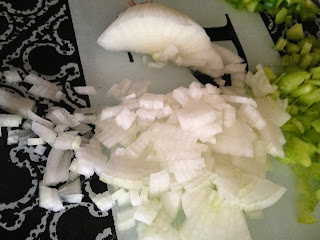 TA DA!! Finely chopped onion! And it was much easier then chopping back and forth across a bunch of pieces of onion. And less watery eyes :)

Now, for some of you, you may have already discovered this awesome trick but for those of you who haven't, YOU ARE WELCOME! lol I know I was pretty stoked the first time I tried it!